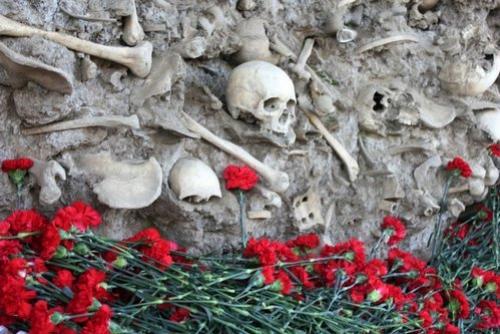 At the beginning of the XIX century the tsarist Russia (after conclusion of the Gulustan treaty in 1813 and Turkmenchay treaty in 1828 between Iran and Russia on the division of the territory of Azerbaijan) began to implement its plan of the establishment of the Armenian state which was intended to serve as a buffer zone within the lands of Azerbaijan. Peter the I who was pondering over the outlines of his future empire 300 years ago, sent his messengers to the south: 'We must try to wave and resettle them [Armenians] into our lands, so that they could be a shelter of Russia.'

For this purpose, in the first half of the XIX century about 300 thousands of Armenian residents of Iran and Turkey were resettled into Azerbaijan and located in the regions of Iravan (today's Yerevan), Daghlig Garabagh (Mountainous Garabag or Daglig Garabag), Nakhchivan, Zengezur, Daralayaz, Ordubad, Vedibasar and other regions.

Inspite of resettlement of Armenians to the territories of Azerbaijan the number of Azerbaijani population lived here prevailed that of Armenians. For instance, in 1886 Armenians lived only in 81 of 326 villages located in the Zangezur gaza (a kind of territorial division) of the Ganja province. 66 percents of Iravan gaza population were Azerbaijani and only 34 percent were Armenian. To achieve the superiority of Armenians in those regions the policy of extermination was applied to the Azerbaijanis. For this purpose tsarist Russia armed Armenians in secret and formed military groups.

Mass expulsion of Azerbaijanis from the territories of present Armenia and Daghlig Garabagh, violence and barbarism toward the peaceful population became particularly evident in the beginning of the XX century especially in 1905-1907 with the help of and under the patronage of the Russian government. Hundreds of villages were burnt in the provinces of Zangezur, Iravan, Nakhichevan, Ordubad, Gazakh and Karabakh of Azerbaijan, all from child to an old were cruelly killed.

In March of 1918, Russian Bolshevik leader Vladimir Lenin appointed Stepan Shaumyan as a special commissar of the Caucasus and dispatched him to Baku. Screened by the fact that they wanted to come to power in Bali, the Bolsheviks created favorable condition for secret purpose of armed forces of Armenian dashnaks. Mass extermination of the Azerbaijanis began on March 31 in Baku. As to Stepan Shaumyan's confession, 6000 armed soldiers of the Council of Baku and an armed 3-4 thousand-member group of 'Dashnaksutun' of party also participated in the extermination of peaceful Azerbaijanis.

During three days of the extermination, armed Armenians with the help of the Bolsheviks suddenly attacked districts where the Azerbaijanis lived and killed everyone. Kulner, a German witness of those terrible days described the Baku events in 1925 as following: 'Armenians rushed into Moslem (Azerbaijani) districts and killed, cut everyone into pieces with swords, pricked with bayonet. After several days of the extermination, 87 corpses of Azerbaijanis were found in the hollow with their ears and noses cut off, their bellies torn, privy parts cut. Armenaians had no mercy either on children or on the old'.

About 2 million of the Azerbaijanis were murdered and forcefully dismissed from their lands during two exterminations held at the beginning of the XX century (1905-1907, 19018-1920).

On March extermination one found in a part of Baku 57 women corpses with their ears and noses cut and bellies torn. We may count another terrible facts: nailing of alive young women to the walls, burning of the city hospital with 2000 people escaped from Armenian occupation. To shoot down survived people Armenians placed machine-guns at definite places beforehand.

On the basis of memories of Ovanes Apresyan, an active Armenian officer taking active part in the xtermination of the Azerbaijanis in Iravan province, Sharur-Dereleyez, Surmeli, Gars and other regions, an American agronomist Leonard Ramsden Hartwill created his book 'Such a man could be'. In his talk with the author of the book Ovanes Apresyan noted that Armenians achieved their aims with the help of the English and Russia and during March extermination in Baku they killed twenty five thousands of the Azerbaijanis.

Dashnaks conducted extermination of the Azerbaijanis not only in Baku, but in Shamakhi, Guba, Iravan, Zangazur, Karabakh, Nаkhchivan, Gars as well.

On March-April of 1918 eight thousands of peaceful population of Shamakhi were killed and many of cultural monuments including the Juma mosque, were burnt and destroyed.

On April 19 of 1918 three thousands survivals of Azerbaijanis, commonly consisted of women, children and the old people were surrounded near Gumru and were killed.

Armed groups of Armenians burnt several villages of the gaza Nakhchivan, destroyed 115 Azerbaijani villages in the gaza Zangazur, 3257 men, 2276 women and 1296 children were murdered. Totally about this zone 10068 Azerbaijanis were killed or invalided, 50000 Azerbaijanis turned into refugees.

135 000 Azerbaijanis lived in 199 villages of Iravan province were murdered, the villages were destroyed. Later the armed groups of Armenia moved in Karabakh, and during 1918-1920 murdered people and destroyed 150 villages in the mountainous part of Karabakh. (the government of the ADR, based on the materials of Commission on Special Investigation)

In May 1920 more than 12 000 Azerbaijanis were murdered in Ganja by the armenians and the XI Red Army.

Deportation of Azerbaijanis from Armenia in 1948-1953

While the Soviet-Iranian relations were focused in Tehran conference in 1943, Armenian Diaspora asked V.Molotov, the Minister of Foreign Affairs of USSR to deport to the USSR Armenians living in Iran. Molotov informs I.Stalin, the chairman of CC CP of the USSR about this matter which had later been approved. Basing on this fact G. Aroutyunov, the secretary of the Central Committee of the Armenia Communist Party strived for taking of the decision about forceful deportation of Azerbaijanis on the pretext of migration to Armenia of Armenians living abroad.

In December 23 of 1947 the Soviet of the Ministries of the USSR took the decision a 'About deportation of collective-farmers and other Azerbaijanis from Armenia SSR to Kur-Araz lowland in Azerbaijan SSR'.

On the next deportation ruled by Stalin in 1948-1953 the matter focused by the Armenians was to vacate economically, socially and morally strong and strategic areas of Azerbaijan. The first stage in this process was the vacation Azerbaijanis first from the territories near around Iravan city (today's Yerevan) and then from the center of the regions, surrounding villages and the settlements.

Part of the deported population liven on the mountainous part of Armenia, so to get used to the climate of the Kur-Araz lowland was very difficult for them. That was why many of 10 thousands of migrated to the Kur-Araz people died.

in the process of the deportation the Armenians used the trick: they kept small quantity of Azerbaijanis in the region and the cities. Those remained in minority were once and for all deported from the country in the next stage of the plan-the total vacation of Armenia of the Azerbaijanis.

Deportation of the Azerbaijanis from Armenia in 1988-1989

Since the January of 1988 the policy of 'Armenia without Turkish' had been realized in planned form. Under the guardianship of USSR the government of Armenia, the committees of 'Karabakh' and 'Krunk', the members of the church of Ichmiadzin participated in thousands of bloody actions in the process of the deportation of the Azerbaijanis.

185 places of the settlement in Armenia were vacated, more that 250 000 Azerbaijanis and 18 000 Kurds were forcefully deported from their houses and 217 Azerbaijanis were murdered by the Armenians in the result of ethnical clearance. 49 of them froze in the mountains when they tries to escape, 35 were killed under torture, 115 were burnt and 16 were shut, 10 could not bare the torture and died of infarct, 2 were murdered by the doctors in the hospitals, the rest were drown, hanged, killed under electricity, other heads were cut off. 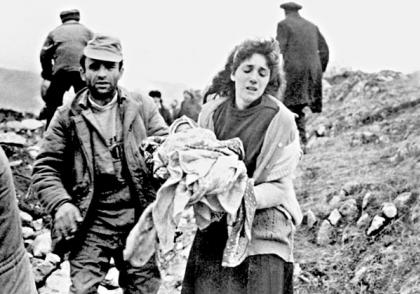