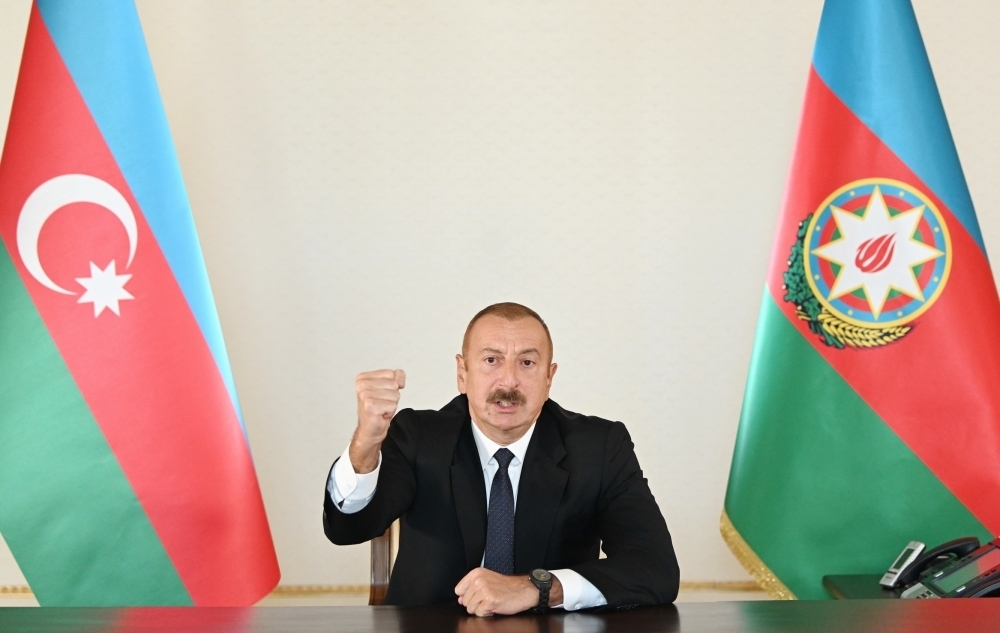 Remembrance Day: Our martyrs have reached eternity and forever inscribed their names in the glorious history of the Azerbaijani people

Two years have passed since the beginning of the Patriotic War, which is inscribed in the history of our people in golden letters. Our lands, which were under occupation for nearly 30 years, were freed from occupation at the cost of the blood and lives of our martyrs, soldiers, officers, and ghazis. Azerbaijan always appreciates the valor of its fighting sons and daughters, and honors the memory of all our martyrs. Our martyrs, who have reached eternity, have inscribed their names forever in the glorious history of the Azerbaijani people.

The commemoration of 27 September as Remembrance Day according to the Decree of President and Victorious Commander-in-Chief Ilham Aliyev dated 2 December 2020 is an expression of deep respect for our soldiers and officers who fought heroically in the Patriotic War and sacrificed their lives for the territorial integrity of our country.

AZERTAC is taking another look at the decisive moments of the 44-day Patriotic War, the heroic chronicle written by our brave Army, and the main factors that made the great Victory possible.

On the first day of the war, the President of Azerbaijan and Commander-in-Chief of the Armed Forces Ilham Aliyev addressed the nation on television and declared that our Army had launched a large-scale counter-offensive operation in response to the provocations committed by the Armenian armed forces in several directions. “Armenia is an occupying state, this occupation must and will be stopped. We are on the right path. Ours is the cause of justice. We will achieve Victory! Karabakh is ours, Karabakh is Azerbaijan!” These words by the head of state in his address to the people became a slogan that inspired and drove every Azerbaijani to Victory over the enemy.

Operation Iron Fist: Azerbaijani soldiers did not take a single step back in 44 days

In the first hours of the counter-offensive operation, good news started coming from the front line. The liberation of the villages of Garakhanbayli, Nuzgar, Yukhari Abdurrahmanli, Buyuk Marjanli, Village Horadiz and Garvand, important strategic heights in Aghdara district and the Murovdag ridge by the Azerbaijani Army, which broke through a reinforced defense line of the enemy, was the first harbinger of the upcoming great Victory.

Brief chronicle of Operation Iron Fist: On 3 October, the Azerbaijani Army liberated the strategically important village of Madagiz on the northern front. A day later, the city of Jabrayil, and on 9 October the settlement of Hadrut were freed from the enemy. On 17 October, the courageous army, which crushed the myth of the “invincibility” of the Armenian armed forces, raised the flag of Azerbaijan in the city of Fuzuli. On 18 October, on Independence Day, the tricolor flag of Azerbaijan began to fly over the ancient Khudafarin bridge. On 20 October, the city of Zangilan was liberated from occupation.

On 25-26 October, our army liberated 17 villages of Zangilan, Jabrayil and Gubadli districts and the city of Gubadli. The next target of the Azerbaijan Army, which liberated 53 villages and several strategic heights between 28 October and 7 November, was the city of Shusha, the beating heart of Karabakh. The fighters of the Special Forces entered the city from several directions, crossing the mountains, forests and ravines, and climbing the steep rocks of Shusha. Our heroic army successfully completed the Shusha operation, which holds a unique place in world military history. Commander-in-Chief Ilham Aliyev announced the liberation of Shusha on the morning of 8 November while in the Alley of Martyrs.

Congratulating the people on the occasion of the Great Victory, the following words spoken by the President with tremendous pride still resonate today: “Shusha, which has been under occupation for 28 and a half years, has been liberated! Shusha is free now! We are back to Shusha! We have won this historic Victory on the battlefield. 8 November 2020 will forever remain in the history of Azerbaijan. This history will live forever. This is the day of our glorious Victory! We have won this Victory on the battlefield... The historic day on which I am sharing this good news with the people of Azerbaijan is perhaps one of the happiest days in my life.”

With the liberation of Shusha, the resistance capabilities of the Armenian army were completely shattered. On 9 November, the Azerbaijani Army liberated a further 71 villages, one settlement and eight strategic heights from the enemy.

The heavy defeat the enemy suffered forced the Pashinyan government to sign an act of capitulation. In the early hours of 9 November, military operations were stopped with the signing of a tripartite statement by President of Azerbaijan Ilham Aliyev, President of Russia Vladimir Putin and Prime Minister of Armenia Nikol Pashinyan. According to the statement, Armenia was to hand over Aghdam district to the Azerbaijan Armed Forces on 20 November, Kalbajar district on 25 November and Lachin district on 1 December.

A total of five cities, four settlements and 286 villages were freed from occupation by 9 November as a result of the successful counter-offensive operation launched by the Azerbaijan Army in Karabakh on 27 September. It was an unprecedented military operation in the modern military history of the world. The Armenian army was almost completely destroyed.

Modern combat experience of Azerbaijan, which has waged the war of the 21st century, is in the global spotlight

The combat experience and tactics of Azerbaijan, which has waged the war of the 21st century, is studied in the military schools of developed countries of the world these days. The Azerbaijan Army won a glorious Victory with the use of the most advanced weapons in difficult natural terrain conditions, demonstrating tremendous professionalism. Our army broke through the enemy's defense lines on the first day and only moved forward for the next 44 days. While more than 10,000 soldiers in the Armenian army deserted, not a single serviceman of the Azerbaijan Armed Forces fled the ranks of the army.

The glorious Victory in the second Karabakh war is based on the heroism and patriotism of our soldiers and officers. The head of state emphasized this many times and said in one of his speeches: “It is not our equipment that won this victory, but our soldiers and officers. They completely freed our land from the enemy and granted this victory to our people. Therefore, the first hero of this Victory is the Azerbaijani soldier, the Azerbaijani officer, and everyone should know this.”

The glorious Victory in the Patriotic War was won at the cost of the blood of the brave children of our people. More than 2,900 soldiers and officers were martyred in the bloody battles for the liberation of our lands from occupation. The heroism of our martyrs and ghazis is highly appreciated by our state and people. By the President's Decree, 27 September was declared the Remembrance Day in memory of our martyrs. Our people and Azerbaijanis of the whole world honor the memory of the martyrs not only today, but always.

By decrees signed by President Ilham Aliyev in 2020-2021, a total of more than 159,000 participants of the Patriotic War were awarded with various orders and medals.

The foundation of the Patriotic War memorial complex and the Victory Museum was laid in Baku on 27 September last year in order to perpetuate the unparalleled heroism of the Azerbaijani soldier in the second Karabakh war and the historic Victory won.

Key factor behind our victories: a unity of the people, state and army

We can say from international experience that the most important factor that decides the fate of wars is the unity of the people, the state and the army. The glorious Victory in the second Karabakh war ensured the close unity of our people around their state and army for the liberation of the homeland. Azerbaijanis living in different countries of the world, as well as representatives of other nations supporting the right cause of Azerbaijan, selflessly fought against the ugly campaigns of the Armenian lobby. All citizens of our country, regardless of their ethnic and religious affiliation, showed unprecedented solidarity. There was an unshakable unity both on the front and in the rear. This unity and solidarity is rightly described as Iron Fist.

Thanks to the profound political skill of the head of our state, great successes were achieved on the diplomatic front. During the war, President Ilham Aliyev gave more than 30 interviews to the world's leading media organizations and conveyed the truth about the conflict to the international community. These interviews, which provided the outlines of the information war, directed the activities of our national media. Azerbaijani media, including AZERTAC, professionally covered the progress of the Patriotic War, promptly and accurately conveying frontline news to our people and the world.

Azerbaijan is progressing from victory to victory. Immediately after the Victory in the Patriotic War, the restoration of the liberated territories began. Important infrastructure facilities were inaugurated in the freed Karabakh and new projects were launched with the participation of President Ilham Aliyev and First Lady Mehriban Aliyeva. Victory Road, a symbol of the great Victory, was built in Shusha. International Airport was opened in Fuzuli. Initially, 66 families (326 people in total) were moved to the “smart village” built in Zangilan district. This marked the beginning of the Great Return.

We are indebted to our martyrs and ghazis for all the victories won. President and Supreme Commander-in-Chief Ilham Aliyev emphasized this many times: “We have not forgotten anything. We cannot forget this. We cannot forget our martyrs, we cannot forget the victims of Khojaly, we cannot forget our destroyed cities. We have already avenged the blood of the martyrs of the first and second Karabakh wars and took our revenge on the battlefield.” According to the President, the most important factor that led us to Victory was the national spirit, dignity and love of the Motherland, and all this was done by representatives of the young generation, young people who grew up during the independence period. They did it by sacrificing their lives and facing death.

In the period since the Patriotic War, important steps have been taken to further strengthen the Azerbaijan Army. Professional commando units have been set up. These brigades will be able to perform any military task.

We once again witnessed the strength and determination of the Azerbaijan Army and its soldiers on 13-14 September this year. Our army duly responded to yet another provocation by the Armenian armed forces in the territory of Kalbajar and Lachin districts and put the enemy back in its place. Unfortunately, 80 of our servicemen were martyred during counter-attack operations. They have been avenged again.

The shed blood of martyrs does not stay unavenged. The heroic soldiers and officers of our army, who have turned a 30-year-old dream of our people into reality and showed the military power of Azerbaijan to the whole world, continue to stand like an Iron Fist in defense of our lands freed from occupation and guard the borders of our country. 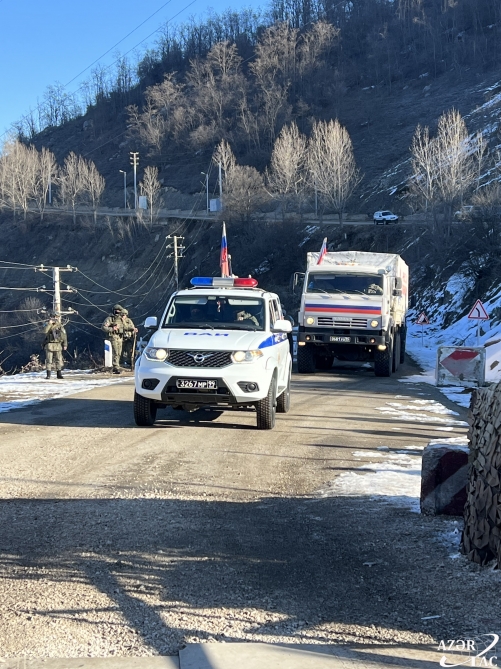 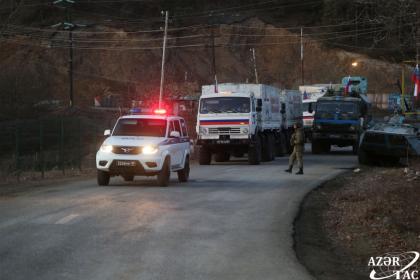 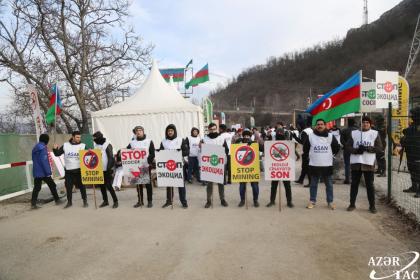 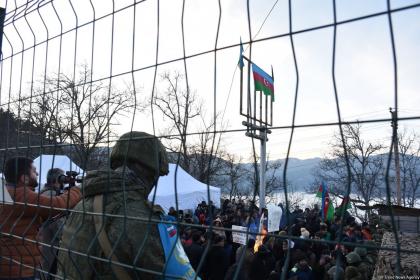 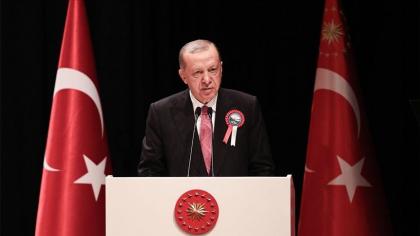 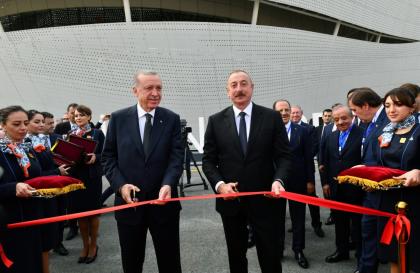 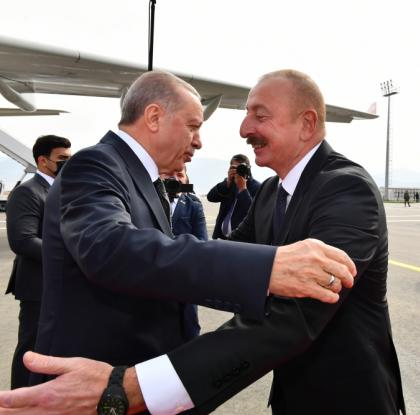 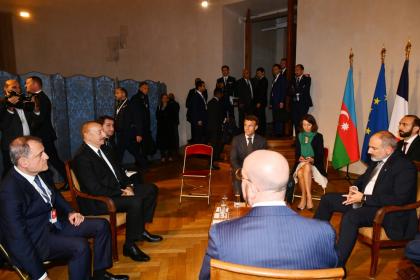