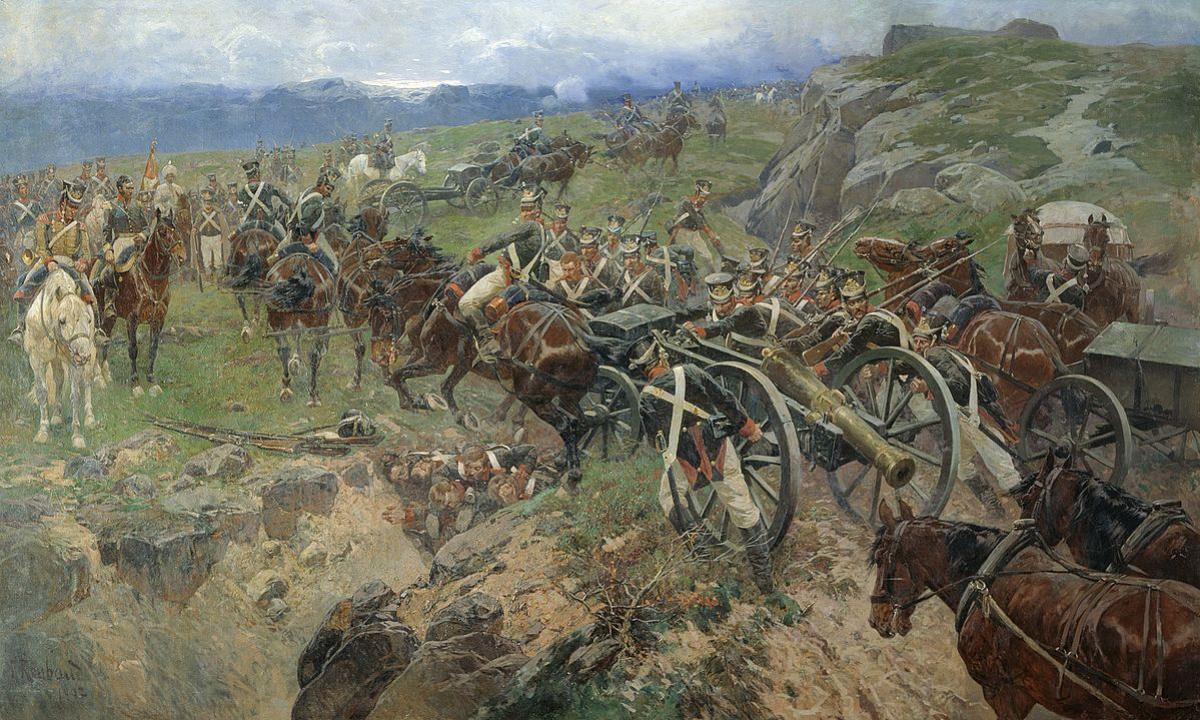 Further to the Kurekchay agreement of 1845, the Karabakh Khanate was annexed to Russia. The preservation of khan's government for additional 17 years had a definite strategic meaning.

The murder of Ibragim khan in 1806 showed that Russia neglected all the rules and laws. Under those circumstances, the power of Mehdigulu (1806-1822), who inherited the power from his father Ibragim khan, was not strong. The tsarist government strengthened its occupation regime and desired to weaken the economic position of the local authorities in order to establish its own power in the region. They also attempted to win the predominance of the Armenified Albanians whom they regarded as a support. After the abolition of the Khanate like other regions of North Azerbaijan the commandant way of ruling was also established in this area and it was annexed to the Military-Muslim district (with the center in Shusha).

At that time lieutenant-general V.Q.Medetov (1782-1829) of Armenian origin, who contributed to the invasive operations of the Russian troops, established a real Armenian-Russian colony in Karabakh. The tsarist government was influenced by the 1830s revolts and conducted an administrative-political reform in South Karabakh on April 10th 1940. The reform turned Karabakh into the Shusha region and put Karabakh under the supervision of the Caspian province (with the center in Shamakhy). Thus, the concept of Karabakh lost its political meaning and was preserved as a geographical one.

During the administrative division of 1846, the Shusha region was subdued to the newly established Shamakhy province (from 1859 to Baku). With the creation of the Yelizavetpol province, the Shusha region was put under its supervision and three more districts-Zangezur, Djavanshir and Djabrayil - were created there. Thus, the Shusha district also lost its unique administrative- political meaning. These reforms created every opportunity for Armenians to take part in the governing.

The tsarist Russia, which occupied those areas tried to armenify the local inhabitants in order to strengthen its positions. After the signing of the Turkmenchay agreement in 1828 (File 3) this process became more systematic and purposeful. Article 15th of the Turkmenchay agreement ratified the resettlement of Armenians from Iran to North Azerbaijan. According to this article, the Shah gave one year to the families living in Iran to freely move from Iran to Russia without obstacles from the side of the government and local authorities, to carry and sell their property, goods for sale and things. AS for immovable property, the families are given the term of five years to sell it to make arrangements about that on their own will. Yet the grant does not concern the people committing crime when a year has not passed over the case. As mentioned above, this article was included into the contract for ensuring the mass resettlement of Armenians from Iran to North Azerbaijan including Karabakh.

By the Edirne contract of 1829 Armenians started to move from the Osmanly Empire to the newly occupied lands of North Azerbaijan. Armenians mainly moved to Karabakh.

Ethnic composition of Karabakh khanate during its abolishment reflected on "Description", drawn up by instruction of A.P.Yermolov (1816-1827), the Commander-in-Chief of Russian troops in Caucasus. In spite of Armenianize policy, carried out before drawing of this document (1805-1822), most of Karabakh population was Azerbaijanis, statistics reports (since 1593).

According to "Description", 15.729 of 20.095 families in Karabakh were Azerbaijanis (1.111 in the town, 14.618 in the country), 4366 - Armenians, including Albanians (421 in the town, 3.945 in the country). Most of these Armenians was Grogoriyanized and Armanianized Albans. New Armenian villages (Maragali, Janyatag etc.) began to appear in Karabakh in result of Armenian's mass removal to this province. (Some time later Armenians erected monuments of the glory of removal in Karabakh, but destroyed them during territorial claims against Azerbaijan in 1980s.). According to official returns, 40 thousand Armenians were removed from Iran to Northern Azerbaijan, including Karabakh, while 90 thousand - from Ottoman empire in 1828-1830s. Their number with unofficial Armenians settlers exceeded 200 thousand. Number of Armenians began to increase in ethnic composition of Karabakh after removal.

Gregorianization and Armanianization of Albanian population of Karabakh was long historical process, as was described above:

1. Native population of Karabakh was Albanian tribes as in other lands of Northern Azerbaijan;

2. Christianity was spread in some places of Albania, including Karabakh in IV century;

3. Islam spread throughout the country during occupation of Northern Azerbaijan by Arabic caliphate and its ruling in VII-IX centuries, but Albanians, living in the mountainous part of Karabakh, did not change their religion;

4. Armenian-Gregorian missionaries, migrated to the Caucasus, seizing favorable situation, appeared in result of Arabic caliphate's occupation, realized Gregorianization and then Armenianization of Christian-Albanian population of Karabakh.

6. Russia's intervention into the region and Armenians' removal from other countries to the Southern Caucasus, including Azerbaijan, lead to strengthening of Armenian factor. This policy created turning-point in historical fate of Gregorianized Albanians. The last stage of their Armanianization started.

7. Armenians' mass removal from Iran and Ottoman empire to Karabakh along with other Azerbaijan regions during Russia-Iran wars (1804-1813, 1826-1828), Russia-Turkey wars (1806-1812, 1828-1829) and particularly after Turkmenchay (1828) and Adirna (1829) agreements completed Armenianization of Gegorianized Albanian population. Albanian Catholicos was abolished in 1836. We can call them Armenians just after this;

8. In spite of that, Daghlig Garabagh Armenians have preserved their specificity, outgoing from Albanian root, among general Armenian population.

Expanding of Armenians' aggressive activity in Azerbaijan, including Karabakh

Armenians' mass removal to Northern Azerbaijan lands, including Karabakh, continued after 1930s. That is why N.Shavrov wrote in 1911, that more than 1 million of 1,3 million of Armenians in Transcaucasia was incomers. Inspite of these, 52% of the population in Karabakh (within borders of khanate) was Azerbaijanis, while 46% - Armenians (including Armenians of local Albanian origin.). Resettlement of Armenians in the mountainous part of Karabakh became more intensive. This policy was aimed to providing of Armenian incomers' compact living and had strategic purpose.

Armenians' strengthening in management control, increasing of their number by resettlement and reinforcement of their economical potential were carried out at the same time. Thus, Armenians could reinforced in the economical life of Karabakh in result of favorable condition, created by tsarism, and its multilateral support.

Economical potential, got by Armenians in result of discriminatory policy of Russian empire, its support and purposeful policy in Northern Azerbaijan, became apparent at abolishment of obligation (илтизам) system over oil land in Baku in 1872. Thus, Azerbaijanis bought only 5% of oil land, while Armenians more than 50% during haggling of oil sections. 55 large and middle companies of 167 oil companies, operating in Baku in 1872, belonged to Armenians. There were created favorable conditions for Armanians' culture-educational upgrade as well. However, Karabakh and its central city Shusha remained public-political and culture center of Azerbaijan people. Despite all hinders and resistance of Tsar government and its puppets (Armenians) Karabakh developed as Azerbaijan-Moslem province.

Thus, Tsar Russia created favorable conditions for Armenians' resettlement to Northern Azerbaijan, including Karabakh, their administrative-political, social-economical and cultural development here. Some time later Armenians began to struggle for realization of idea "Great Azerbaijan" in Azerbaijan territories. One of the integral parts of this idea is to annihilate local Azerbaijan population in Karabakh, Yerevan, Nakhichevan and other Azerbaijan territories and to capture their lands. As Armenians treacherous rebellions, stirred up against Ottoman state since 1890s, failed, the center of struggle was moved to Northern Azerbaijan.

Armenians committed mass genocide against Azerbaijan people again since 1905. Armenians' genocide policy acquire more tragic nature in Karabakh. But carnage of 1905-1906s did not appeased them. They attempted to establish mythic "Great Armenia" again, seizing the historical situation, caused by the First World War. Armenians, whose rebellions against Ottoman state in 1915 failed, began to focus main forces in the Southern Caucasus and carried genocide out against Azerbaijanis with Tsarism's support. Armenian armed groups, served in Russian army for long period - during anarchy in the Trascaucasia, created in result of coup d'etat (February, 1917) and Bolsheviks' accession to power (October, 1917), began new and more terrible genocide against Azerbaijanis, joining Dashnak-Bolsheviks. These new mass carnage, begun in Baku in July 1918 and enveloped whole country was very hard blow to Azerbaijan government. New stage began in history of Azerbaijan with establishment of the Azerbaijan Democratic Republic. Young government took measures to prevent plans of Armenian gang groups and Dashnak-Bolshevik regime concerning annihilation of Azerbaijan people. 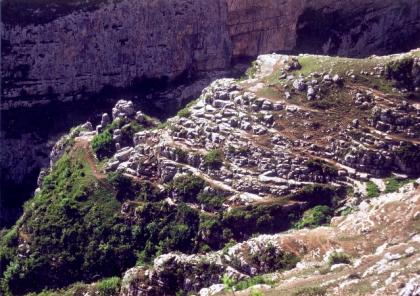 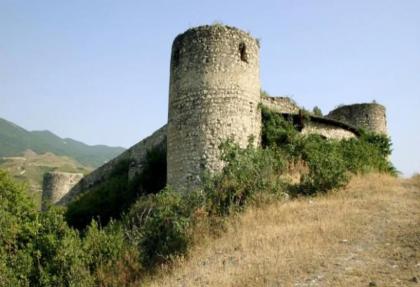 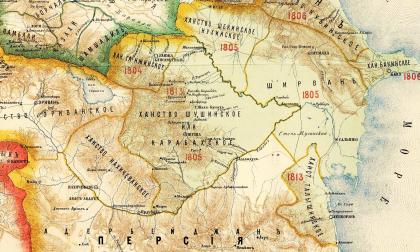 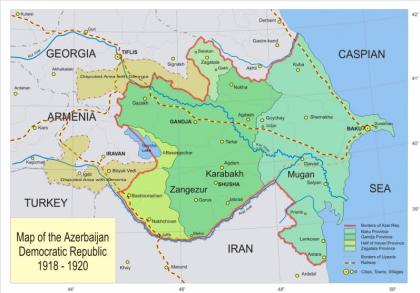 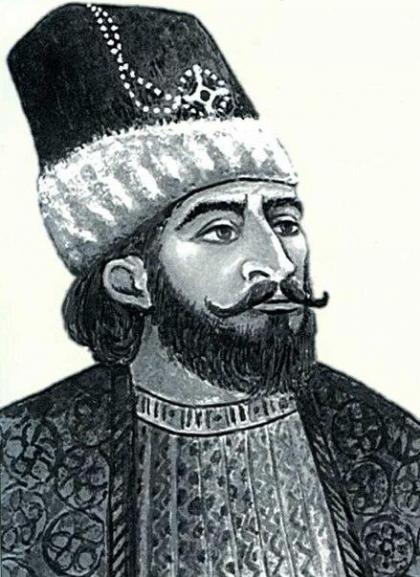 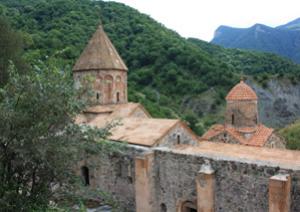